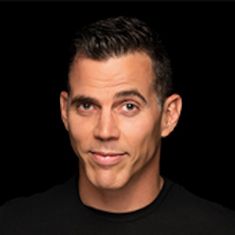 Steve-O (a.k.a. Stephen Glover) has become a household name and it all started when he snatched a video camera from his father’s closet when he was fifteen years old.

Eventually, Steve-O’s videos made it into the hands of Jeff Tremaine (Jackass Creator, Director & Producer) who was working with Johnny Knoxville to create a stunt based reality show. The rest is history. MTV aired Jackass for three seasons. Steve-O also launched his own “Steve-O Don’t Try This At Home Tour”, establishing himself as an accomplished stage performer, at venues throughout the U.S. and in a dozen countries.

When the Jackass TV series ended, the team moved on to movies releasing Jackass: The Movie, and later Jackass: Number 2 as well as Jackass: 3D, all with Paramount films. Steve-O and fellow Jackass alum, Chris Pontius, were given a spin-off show entitled Wildboyz, which aired on MTV and MTV2 and lasted four seasons. Steve-O continued to thrill audiences with his outrageous stunts. He competed on ABC’s hit show, Dancing With The Stars, and lasted six weeks, despite an injury and having virtually no dancing ability whatsoever.

Steve-O has become a New York Times Bestselling Author with the release of his memoir, Professional Idiot, and has established himself as a force in the world of stand-up comedy. Thus far (and still counting), his career as a performer has brought him to a total of 38 countries, and his first hour-long comedy special, Guilty As Charged, recently premiered on Showtime and performed in the top one percent of all Showtime comedy specials.

Now in his forties, and wanting to out-do all of his previous work, Steve-O decided to address the "unfinished business" on his bucket list. He's been filming the most elusive and outlandish stunts he ever dreamt up (including Cauliflower Ear, the General Anesthesia Olympics, Vasectomy Blue Balls, Sky-Jacking... to name a few), and is now screening the all-new, unreleased footage exclusively on his BUCKET LIST TOUR, which began in 2018. This new, live show is a multi-media comedy event which explores just how high the bar has gotten for Steve-O's stunts, and the stress they have caused for his loving fiancee, Lux Wright.

PROOF OF VACCINATION REQUIRED for these shows.

- Negative test results WILL NOT be accepted as an alternative.*
- Photos or digital copies of vaccination cards are acceptable.      - *Any patron needing an exemption due to a medical condition, disability or religious belief will need to Download Patron Vaccination Exemption Form and bring the signed complete form along with a proof of a negative COVID test taken no more than 72 hours prior to entry.

FACE MASKS ARE REQUIRED upon entering & when moving through the building for ALL SHOWS.


Our vaccination policy is subject to change. Please review our Safety Protocol.