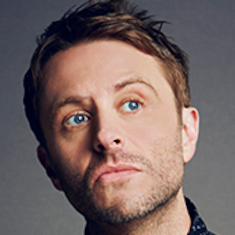 Please help us keep our staff and customers safe by continuing to wear your mask. Face masks are REQUIRED upon entering & at ALL times when moving through the building.

Chris Hardwick is a comedian, actor, TV host, author, writer, producer, podcaster and pop culture enthusiast. Chris is perhaps best known for his work on the two-time Emmy Award-winning Comedy Central show, @midnight, which he hosted throughout the duration of its 600 episodes. His widely popular podcast, Id10t, attracts some of the world’s most influential people.

Hardwick is the host and executive producer of NBC’s hit game show series The Wall (entering its third season), featuring everyday people and families competing for life-altering amounts of money in a game of knowledge, camaraderie, and luck. Hardwick also serves as the host of the Emmy-nominated Talking Dead (currently in its ninth season), an after-show analysis of the iconic The Walking Dead franchise.

On stage, Hardwick continues to solidify himself as one of today’s top touring comedians hitting the road again in 2020, this time incorporating music into his stand-up for the Wizard Guitar Tour, which will hit 30 cities around the US. Following his 2012 stand-up special, Mandroid, Hardwick toured his 2016 show, Funcomfortable, during which he shot a one-hour comedy special.

Hardwick’s own television production company, Fish Ladder, has a first-look deal with AMC Studios where several projects are currently in the works. Broadening his production duties, Hardwick joins the Blumhouse family though a three-picture first-look deal. Additionally, the fanatical horror fan will step behind the camera for one of the films he’s set to produce, adding the title of director to his already extensive resume.