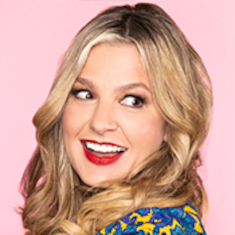 Christina P is a stand-up comedian, writer, TV personality and podcast host. She has two Netflix specials, The Degenerates and Christina P: Mother Inferior. The Degenerates was filmed in Las Vegas. Christina discusses the upside of getting older and the “Me Too” movement. Her one-hour stand-up special, Christina P: Mother Inferior, filmed at the Showbox in Seattle, debuted to rave reviews. Christina discusses the realities of motherhood, marriage and her own childhood.

The hugely successful podcast Your Mom’s House, which Christina hosts with her husband, comedian Tom Segura, is a top-rated comedy podcast on iTunes.

Christina is best known for providing her unique and humorous pop culture commentary on several Vh1 countdown shows, TV Guide Channel, SyFy Channel’s Insane or Inspired, TruTV’s World’s Dumbest and E! Television’s Wildest TV Moments. She was also on TruTV’s How to Be a Grown Up, TBS’ Funniest Wins with Marlon Wayans, and was a round table regular and writer on E!’s Chelsea Lately.

With a background in animation, Christina has written on and lent her voice to several animated projects, like the feature film TV: The Movie, the TV series Trolls, and narrated the documentary Can We Take a Joke?. She was given Animation Magazine’s “Up and Coming Writer” Award.

Christina’s stand-up can be seen on the Showtime special Red Light Comedy, TV Guide Channel’s Stand Up in Stilettos, and Nuvo TV’s Stand Up and Deliver. She’s also performed at comedy festivals and comedy clubs across the world and has performed for the troops.