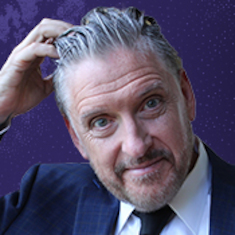 Craig Ferguson is a multiple Grammy nominated, Peabody and Emmy Award-winning actor, writer, producer, director and comedian with a diverse career that encompasses film, television and the stage. He is a New York Times bestselling author and has recorded numerous stand-up specials for Netflix, Epix, Comedy Central and Amazon.

The wildly popular Late Late Show with Craig Ferguson ran on CBS for ten years and remains a cult favorite on YouTube racking up millions of views every year.

Born in Glasgow, Scotland, Ferguson got his start on ABC’s The Drew Carey Show, playing Drew Carey's boss, ‘Nigel Wick,’ from 1996-2003. Ferguson has gone on to write feature films like The Big Tease and Saving Grace. Ferguson debuted his original History Channel show, Join or Die, which featured him and his celebrity friends debating provocative topics with history experts. He also hosted Celebrity Name Game in syndication where he won the Emmy for best host two years in a row.

In 2003, he made his directorial debut with I'll Be There, which he also wrote and starred in. Craig has also written a novel entitled Between The Bridge and The River, which made it onto the bestseller list. His most recent book Riding the Elephant- a series of linked biographical stories- is available from Penguin books.

Ferguson has achieved notable success on the North American comedy circuit and has performed to sold-out theaters all across the country. He has five widely acclaimed stand-up comedy specials: A Wee Bit O’ Revolution (2009); Does This Need to Be Said (2011); I’m Here to Help (2013); Just Being Honest (2015); Tickle Fight (2017). He also released the six part stand-up / docu-series Hobo Fabulous on Amazon in 2020.