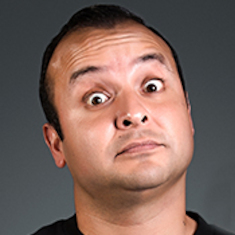 Frankie Quiñones takes the stage along with live performances by his characters "Creeper" (CholoFit) and "Juanita Carmelita" (The Funny Drop).

Frankie Quiñones is a stand-up comedian, actor, and creator best known for his character work. Frankie stars in the upcoming ABC Studios Hulu show entitled This Fool, which premieres on August 12, 2022.

His new podcast The Frankie Quiñones Show, presented by Will Ferrell’s Big Money Players Network and iHeart Radio, features sketches of colorful characters based on the friends and family that helped shape him into the powerhouse comedian he is today.

He recently co-starred in a Lifetime movie alongside Mario Lopez, entitled Feliz Navidad, and was a series regular on TBS’ The Dress Up Gang. His half-hour HBO MAX special Superhomies is streaming now.

In addition to his stand-up and online sketches, Frankie voices key characters in Cartoon Network’s Victor and Valentino, and in HBO MAX’s upcoming animated series, Fired on Mars. Additionally, he has made appearances on Comedy Central, HBO, TBS, and Nickelodeon.