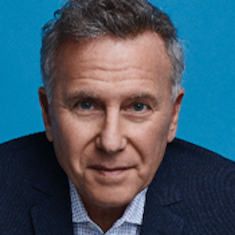 * Our vaccination policy is subject to change. Please review our Safety Protocol.

Comedian, actor, television writer, author, and musician Paul Reiser has spent the last 30+ years acting in Oscar and Emmy award-winning movies and TV shows. He was voted one of Comedy Central's "Top 100 Comedians of All Time." 2017 was an exciting year for the NY-bred and LA-based Reiser, who has made a number of appearances on screen and even lent his talents behind the camera.

Reiser joined the cast of Netflix's Stranger Things for the series' second season. He currently stars on Chuck Lorre’s The Kominsky Method on Netflix, for which he received an Emmy nomination for Outstanding Supporting Actor in a Comedy Series. The multi-faceted actor also revived one of his most iconic roles in the highly-anticipated return of Mad About You, the long-running hit 90s comedy Reiser co-created and starred in with Helen Hunt. All seven seasons of the original Mad About You and the reboot are available for streaming on Amazon Prime.

Throughout his prolific career, Reiser has worked with both independent and mainstream filmmakers. Reiser earned acclaim for his supporting roles in the Academy Award-winning film Whiplash, John McDonagh’s War on Everyone and frequent collaborator Jeff Baena’s The Little Hours and Horse Girl.

Reiser’s book, Couplehood, has sold over two million copies and reached the number one spot on The New York Times bestseller list. Reiser’s second bestseller, Babyhood, features his trademark humorous take on the adventures of being a first-time father, followed by his third bestseller, Familyhood.