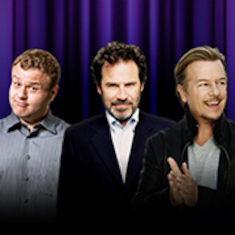 Proceeds will benefit The Zarlengo Foundation, a 501(c)3 non-profit organization that supports schools and programs for learning disabled children in and around the Denver community. Proceeds from the event will be used for scholarships, classroom resources, teacher training, and supporting the Zarlengo Foundation Learning Evaluation Center at Havern School. Since its inception, the the foundation has contributed $1,183,210 to education-related causes in the Denver area. For additional information about The Zarlengo Foundation, please visit zarlengofoundation.org. For information on sponsorship packages, please contact Kathryn Zarlengo at 303-357-5633 / kmzar@comcast.net.

About Frank Caliendo:
Comedian, actor, and impressionist Frank Caliendo has been making people laugh his entire life. He is well known for his impressions of famous personalities Donald Trump, Robin Williams, Robert DeNiro; politicians George W. Bush, Bill Clinton, Barack Obama; broadcasters John Madden and Jon Gruden; and talk show hosts Dr. Phil, Jay Leno, and David Letterman. A veteran of television sketch comedy as a cast member on Mad TV, Caliendo has been a fixture on television for over a decade. After completing an impressive 10-year run on the FOX NFL Sunday Pregame show, Frank found a new home over at ESPN, where he joined the cast of the Sunday NFL Countdown. Frank’s Gruden QB Camp segments, Super Bowl Richard Sherman 30 for 30 mocumentary, and #IfTrumpWere parodies are among the plethora of his works that have gone viral across the web. Though Frank can be highly known for his variety of sports-related impressions, he makes his live shows appealing for everyone in attendance.

About Dennis Miller:
Dennis Miller is a five-time Emmy award winner for his half-hour, live talk show Dennis Miller Live which had a nine-year run on HBO. Miller has released eight comedy specials for HBO, and his most recent stand up special, Fake News, Real Jokes, is available on Amazon Prime. He was also the host and executive producer of CNBC's Dennis Miller, a topical interview talk show. For two seasons, Miller called the plays alongside Al Michaels and Dan Fouts on ABC's Monday Night Football. He was also the Weekend Update correspondent on Saturday Night Live for six years. Dennis has achieved success in the literary arena with four books, I Rant Therefore I Am, The Rants, Ranting Again, and The Rant Zone. All have been New York Times Bestsellers. Dennis has appeared in such films including Disclosure, The Net, Murder at 1600 and What Happens in Vegas. As Miller tours preparing for his new special, you can hear him ranting on his twice weekly podcast The Dennis Miller Option (PodcastOne!) or his twice daily syndicated, 60-second radio feature The Miller Minute.

About David Spade:
Nominated for an Emmy Award for his role as Dennis Finch on Just Shoot Me, David Spade became a household favorite during his five-year stint as a cast member and writer on NBC’s Saturday Night Live. Spade also starred in the CBS comedy Rules of Engagement which enjoyed excellent ratings and critical success throughout its seven seasons. Spade has been seen in popular films including Benchwarmers, Dickie Roberts: Former Child Star, Tommy Boy, Grown Ups 1 & 2, The Hotel Transylvania Series, and Joe Dirt. Spade can be seen in recent Netflix original comedies, Father of the Year and The Do-Over. He is also a New York Times Bestseller with Almost Interesting and A Polaroid Guy in a Snapchat World, an Audible exclusive. Currently, you can see Spade in his new late-night series Lights Out with David Spade on Comedy Central. Up next, Spade will star in the Netflix original movie, The Wrong Missy.

Comedy Works is shut up tight like all of you! Notifications of rescheduled shows have been emailed to you. Rescheduled shows will be honored for the same night and showtime in the new date. As any new rescheduling occurs, we will email you at that time.

Should you have any questions, please email us at question@comedyworks.com You can also subscribe here for our notifications. We are only keeping our distance for now. Be safe and smart and this will all be over soon.