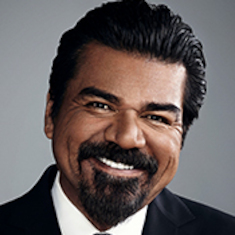 For two seasons, Lopez hosted the TBS late night talk show Lopez Tonight, which represented his return to series television after his groundbreaking hit sitcom George Lopez, which ran for six seasons on ABC. Lopez also started in the comedy series Lopez which aired on TV Land for two seasons.

Most recently, Lopez was seen in the film El Chicano. He is also set to star in Walking With Herb and the upcoming crime thriller The Tax Collector. George produced and starred in the Lionsgate inspirational drama, Spare Parts, as well as the FX comedy series Saint George. He released his second memoir and debuted his third solo stand-up special, It’s Not Me, It’s You, on HBO. Lopez also voiced animated characters in a string of animated blockbuster films including Rio, Escape from Planet Earth, The Smurfs, and The Beverly Hills Chihuahua. His other most recent film credits include the box-office hit Valentine's Day, Swing Vote, Henry Poole Is Here and Balls of Fury.

Lopez has risen to become one of the premier comedic talents in the entertainment industry. His stand-up albums have earned him three Grammy nominations for “Best Comedy Album.” George’s autobiography titled Why You Crying?, entered The New York Times Bestsellers Top 20 list. Time magazine named him one of the “25 Most Influential Hispanics in America,” and the Harris Poll named him one of the “Top Ten Favorite Television Personalities.”

Comedy Works is using YONDR to lock up cell phones and smart watches during shows at both of our locations. (As of 4/13/2022)